Just had an email from customer Jeanette Jones, with feedback that lit up our weekend:

“I bought this trowel at the Whitchurch Potato Days about 3 years ago and use it constantly at my allotment. It is lovely to use and is perfect used on its side in a chopping motion to despatch slugs as well as for weeding and planting. I would totally recommend it.”

Sometimes everything comes together just right – and it did for this show.

The sun shone, the displays were breathtaking, and you could feel everyone’s spirits lift at the sight of it all.

The nurseries excelled themselves with original displays.

There were snowdrops, of course.

And hellebores and daffodils, all beautifully presented.

One of our favourite stands was Hardys of Whitchurch, with a soft spread of cottage garden plants.

There was a flower arrangers’ stand, too.

Our stand was behind a display of irises.

In front of us was the citrus grove of Plants for Gifts.

This hand-made wooden wheelbarrow was part of our display. An enjoyable and exhausting couple of days. 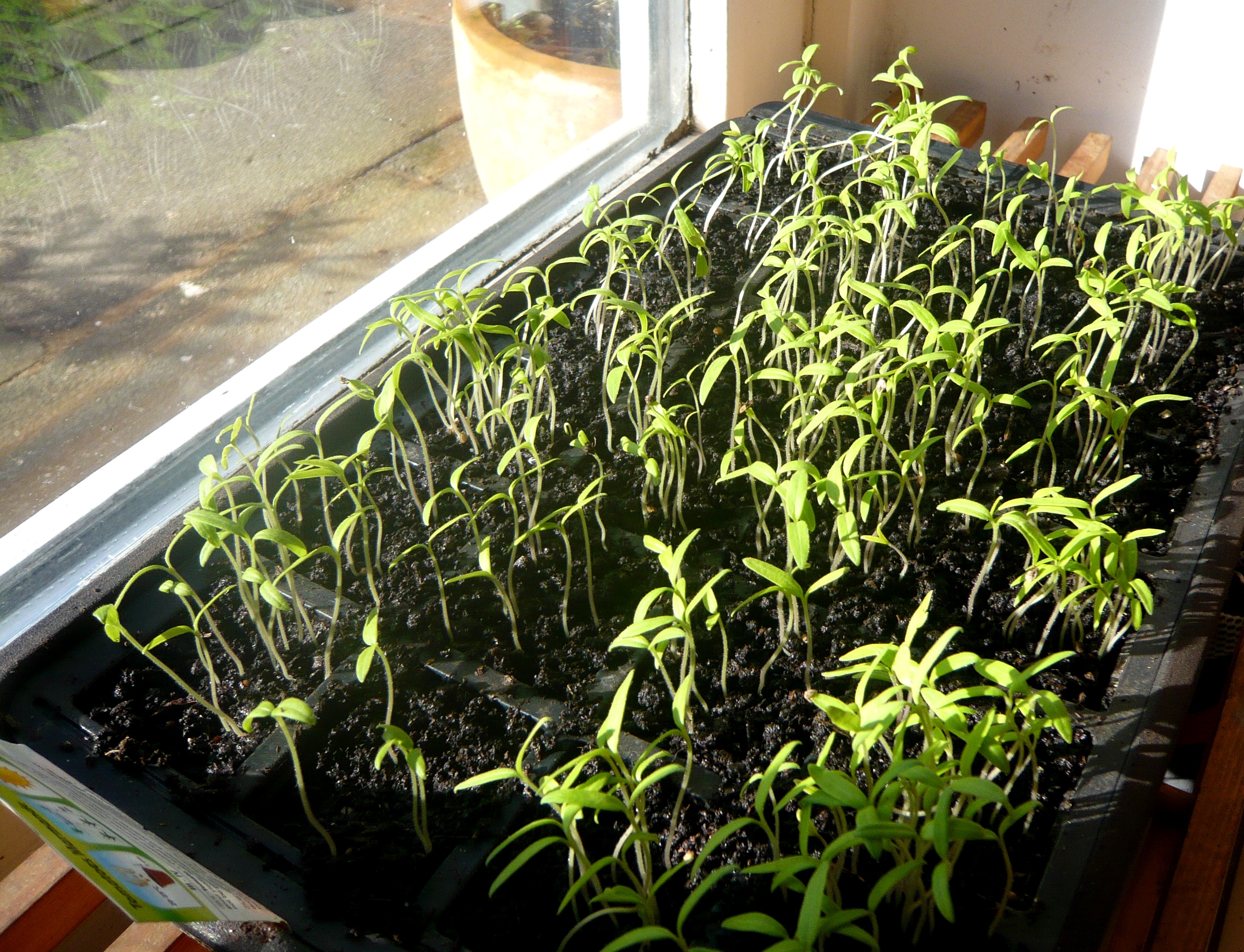 I sowed a pack of 80 Marmande tomato seeds at the end of January, put the tray on top of a kitchen cupboard where it was warm and safe, and waited. A week later they had started to germinate – all of them. Our greenhouse is small, so we will only need four plants. Marmande tomato seedlings, anyone?

Suggestion for a gift: an inscribed Mira Trowel.Use this or your own choice of wording for the inscription. If you’re in the UK, place your order by Monday 10th February and we’ll get it to you in time for Valentine’s day.

We’ll be there on the Sunday, talking about Viktor Schauberger, water and copper. The organiser is one of our founder customers, a lovely inspiring man with a track record of organising this sort of thing (he used to run the Leamington Peace Festival, which is still going strong every year). Click on the link below for further details.

Many people report that wearing a copper bracelet helps to ease  arthritis. I have often seen  gardeners and farmers with copper bands on one or both wrists, presumably because the cold damp conditions they sometimes work in aggravate the symptoms. However, it never occurred to me that using bronze (mainly copper) garden tools could have a similar effect.

A few years ago I received an extraordinary letter from a customer, a professional gardener in mid-Wales (known for its damp climate). She had been given a Mira Trowel as a gift, and had noticed that the arthritis in her hand and arm had eased. She did not link the two phenomena until she lost her trowel – and the arthritis came back. Her letter accompanied an order for a new trowel.

This was such a strange story that I put it in my mental  ‘mystery box’ of curiosities, pending further information. Then I received a phone call from another professional gardener in the south of England. The Vega Hand Fork was the only tool that did not trigger her colleague’s repetitive strain injury in their hand and wrist, and they needed another one.

However, two stories do not make a trend. With a copper bracelet the metal is in direct contact with the skin. With our tools the gardener holds the wooden handle rather than the bronze tool head, so I still can’t see how using it would make a difference. Maybe it’s because the tools are sharp and smooth, so there is less resistance from the soil as the gardener works. Or maybe somehow the metal itself does have an effect even through the (electrically insulating) wooden handle. Or maybe it’s just coincidence.

The stories are still in my mystery box!

Every winter solstice I decorate the trees in the garden with baubles. They sparkle when the sunlight catches them. This morning two collared doves sat on one of the trees among the silver and gold balls. Not quite the turtle doves from the carol, but not far off! 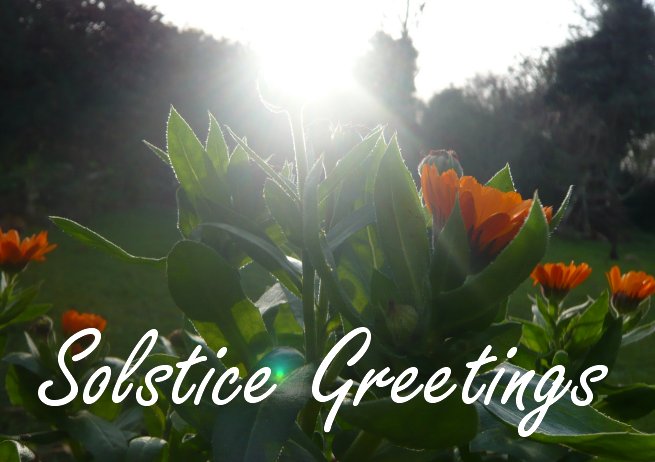 Warm wishes from the turning point of the year, and wishing you many good things in 2014

Last Saturday our tool inscriber’s assistant Matt drew a name out of the (appropriately Austrian) hat for the recipient of the Implementations Christmas Gift.

And the name he pulled out was …

the venture that will receive £120 worth of our tools …

nominated by a reader of our twice-yearly newsletter …

Each year we ask our customers to nominate a local charity or community venture who they feel would make good use of the tools. This year’s first nomination is the Easton Community Garden in Bristol.

The second nomination is Gerddi Bro Ddyfi Gardens in mid-Wales. They haven’t got a website, so the link is to their Facebook page. They provide and promote a therapeutic community garden for all people in the Bro Ddyfi area, especially those at risk of social exclusion.

Nomination number three is the Glastonbury Healing Gardens, also with a Facebook page rather than a website.

Healing Gardens Cooperative is homed in the grounds of Healing Waters Sanctuary in Glastonbury. They currently have around 30 members who all benefit from the produce that they jointly grow in this community garden. They are committed to healthy living and growing in a way that does not cause harm, working in harmony with the land, the seasons and each other.

Nomination number four is Lower Shaw Farm, a suburban co-operative in Swindon in Wiltshire. They describe themselves as a 3-acre oasis in an area of suburban development. It is run as a co-operative by residents Andrea, Matt, and a phenomenal team of helpers from near and far. Its outbuildings have been converted to meeting rooms, dormitories, and workshops. With its large vegetable, herb, and flower gardens, its shrubs and trees, its puddles and ponds, hens and ducks, black and white sheep, friendly pigs, and unspoilt areas for play and exploration.

Sounds worth a visit!

Their aim is to grow high-quality affordable produce to their local community, and to spread the word about how they do it.

Nomination number six for the Implementations Christmas Gift is the Corpus Christi Garden in Brixton in London, used by both the church and adjoining Primary School. It was taken over by Daisy Garnett and her husband last year, and now instead of a rubbish tip it is an English cottage-style garden with borders, fruit trees and walkways, managed by Daisy and maintained by volunteers including children from the school.

Everything is in stock at the moment,

But that can change fast!

it means that we are out of stock and are waiting for more to arrive.

When your order contains a back-ordered item we will wait until it arrives before sending your complete order to you.